So I don’t know where the Miller MAF investigation went, but I recognize that the original AFM isn’t extremely reliable. That being said, I don’t support a wholesale change that requires the entire field to upgrade. Giving it some thought, it appears to be possible to retrofit stock AFMs to behave identically and have a near infinite life. How is this possible you ask? Simple. The proposed solution would be to use an absolute encoder to read position, then convert it to a value that the stock engine controller could read. The output could be exactly identical to a stock AFM, eliminating any need for chips or other upgrades. It’s totally reverse compatible with the original AFMs so nobody feels that they’re at a disadvantage.

So what’s the installation look like? It’d require an external 12V supply to power the added electronics. Other than that it’d be a drop in replacement. I estimate the cost to convert a stock AFM would be around $250-300 and it’d have a near infinite life. In contrast, my genuine Bosch rebuilt AFM lasted only 5 years. If this is something you’d be interested, let me know. Obviously a rule change would be required, but the

In order to make this happen, I’d appreciate some assistance with the electrical design if anyone has that talent. I can design it myself, but would like someone else to assist and comment on the circuit designs. They’re fairly simple, but I’m not an electrical engineer and I’d like this solution to be very robust.

I have an AFM I plan to crack open this weekend to take some mechanical measurements. Assuming that I can fit the encoder in the case, I’ll start drawing up some schematics in the next few weeks. Given my other commitments I don’t expect this to be ready for testing this year, but am gauging interest before I begin. If there is interest, I’d expect a beta test next year and perhaps we could begin converting in bulk during next year, assuming the rules are changed accordingly.

More power to you. I mean that sincerely.

I didn’t really understand how you would sense the door’s rotation angle. Remove the the circuit board and wiper arm, then install a widget on the rotating shaft?

I think that the way to make this work, defined as win common approval, is to call it a “no performance change, more durable than OEM replacement”. Then, so my thinking goes, all you’d have to show is that it doesn’t add performance. I’d be happy to help there.

For example, I could be a handy second opinion that your “door position” vs. “voltage to DME” data is both kosher and also a legit “no performance improvement” approach. I can also get your idea tested both on the dyno and in races.

You’d have to win the “no performance improvement” point, and that can be surprisingly challenging if someone is strong on hate and weak on physics. Win that, and your idea could be a simple “OEM equivalent” just like buying a Chinese waterpump from Rock Auto.

Your idea could potentially be accepted as a available replacement item. You’d still have to win the “tamperproof” fight tho.

I’m in. Can help with the design. Former GE Aircraft Engine design engineer.

So the concept is that I remove the circuit board and the wiper arm and install an absolute encoder on the shaft. The key design issues to address are 1) mapping the resistance to the angle of rotation, 2) fixing the body of the encoder rigidly in the housing, 3) designing the conversion circuit, 4) writing the code, and 4) finding a tidy source of 12V power. I don’t see any of these to be a significant challenge as there’s a fair amount of room in there and aside from the power supply circuitry, it’s pretty straightforward. Automotive power supply circuits are a bit more complex because of the noisy 12V line, which is the key reason I’d like to get some input.

In terms of “no performance improvement,” the only risk I see is that the variation in resistance curves of “rebuilt” units is likely to be greater than what we develop. Ours will be exactly matched to one curve on every single unit. There may be differences in dyno results, but they’d result primarily from variations in the curves on conventional units. Nonetheless, if someone wants to fiddle with the spring pre-loading, they’d still be able to do that. Regarding other fiddling, this is about as hard to tweak as reprogramming a look-alike ECU EEPROM with a new map. That’s more than most people are willing to do but still possible. Although again, less likely than fiddling with the AFM spring which (I believe) was allowed?

I’m not sure if it’d qualify as an “OEM equivalent” because it requires the extra 12V source, but under that interpretation no rule change would be required.

Awesome, email me at herd dot matt at gmail and we can discuss further!

I’m an EE and this wouldn’t be too hard to do conceptually. Just get a absolute encoder and a digital potentiometer using the SPI interface. Then use some kind of controller to read the encoder and send the value to the potentiometer. The computer would see voltage as it does now. I believe the AFM is linear with respect to resistance vs barn door position.

I would be strongly opposed to any change to the DME (ECU or whatever you want to call the computer) because that opens a whole can of worms policing that. That is why I don’t like the Miller MAF idea. This mod should give no performance gain no matter how you try to tweak it, and should be equivalent to an ‘analog’ AFM.

But my AFM works fine, so not really motivated…

Not weighing in for or against the idea, but I think the belief that a it is not a"wholesale change requires the entire field to upgrade" in incorrect. Even someone who has (currently) a known good and accurate AFM is likely to do this just simply to remove the possibility of the AFM acting up on a race weekend. And at $250 to $300, we aren’t far from the MAF solution already proposed (and already developed, tested, trialed, etc). And as small as Miller is, a one person operation is even smaller, imagine the backlog when/if a finished solution was available.

I would like to add something. I don’t believe an encoder would be the right way to do it. Right now, the issue with most AFMs from my understanding(After the obvious connection issues) is the amount of force it takes open the door, which correlates with airflow. With that said, 2 failure points exist on the current unit. 1 is the obvious spring. This spring in some cases are older then myself or of the same age. The second failure point is is the bushing/bearing at the bottom of the flap (See video, click the video for noise). When that bearing fails, the door starts to rub against the bottom of the unit, slowing it down. At partial throttle, that slowing down pulls timing and fuel as it doesn’t react with the airflow as quickly as needed.

This is where the airflow encoder idea might hit a snag. Why go through all the effort recreating the curve of Vout( voltage out, which is the angle of the door) with a similar mechanical system. Encoder or not, we will need: a spring, a door and an encoder. Yes the encoder will allow for a longer life on the top end, but the bottom end will fail as I stated above. This is why a MAF is a definitive solution, but not in it’s current form. Yes all the engineering has been done for the current design, but what makes it fail is it allows for better airflow.

This is where I would suggest revisiting the maf, but maybe reusing the current AFM cores to have exact max air flow and therefor the exact max power. Something drop-in that not only emulates the output, but keeps the original dimensions could be a better solution. 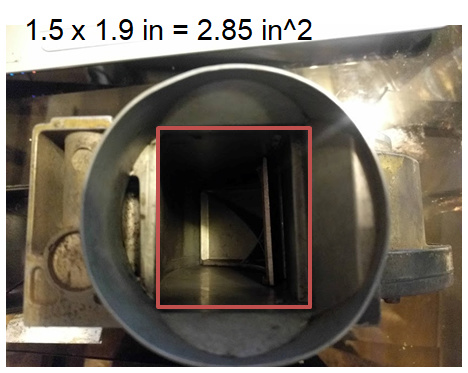 The rectangle is the area that defines the power.

In the end, having that door&spring is the biggest issue with the AFM. Let’s get rid of them. No moving parts is much better.

Edit: Just did some quick math. the miller has twice(2.29 times) the area for air flow. That is one of the reasons why we gain power when using the miller. Now if we can add a restricter to the miller, or use a smaller tube that matches our AFM, the gains will be almost negligible(blah blah laminar flow through tube).