Bottom line. I was surprised to have to move the car rearward 14" to get the tongue weight at the target 9%.

Details.
Bought a new 24’ trailer recently. The new trailer’s tongue is about a foot shorter than the old one, making the trailer that much shorter overall. What I don’t know is the position of the new trailer’s wheels, relative to the hitch ball. To the eye it looks about the same, but since the new trailer is shorter, the distance from hitch ball to center of trailer axles is probably a little different.

Altho the new trailer has torsion, vs. spring suspension like the old one, I don’t think that makes a difference on the scales, as long as the trailer is level.

Since I have a half ton and it’s a Ram and therefore has especially soft suspension, I’m motivated to keep tongue weight low. I do have airbags in the rear tho. Otherwise the truck would be on it’s bumpstops.

Interesting takeaways from the #'s.

Position 4 probably gives me a tongue weight of 772 lbs, about 9%. Slightly lower then the US standard, but higher than the Euro standard. Since tongue weight and trailer stability is all about towing speed, 9% tongue weight will be plenty for me.

This pic is of the LF wheel. In the upper left corner is the trailer’s left-side wheel fender. Note that position 5 has the car’s front tire rearward of the fender leading edge. I bet the center mass of the car was about of the trailer’s rear axle. Pretty far rearward, eh? 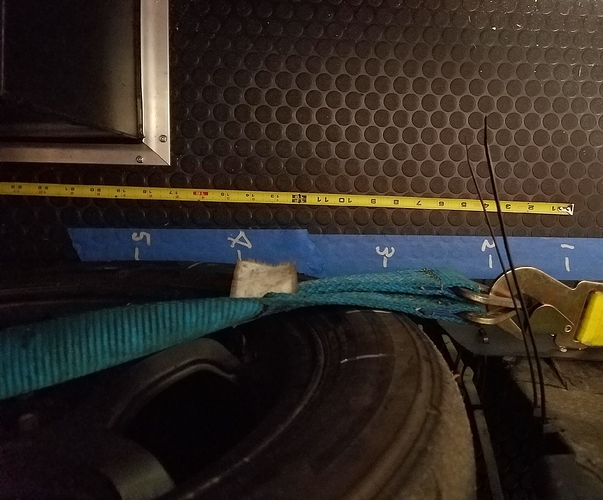 If you add up your weight values and then calculate the %’s, the first thing I noticed is the totals vary. I suspect that your weight changes are too small for the scales to accurately measure repeatedly.

I assume you rolled off, adjusted the car, and rolled back on for each weight series?

In other words, you didn’t stay on the scales and adjust the car.

I’d mostly be concerned with the trailer developing a sway from too little tongue weight. Going downhill and cross winds also contribute / trigger such oscillations, so if you’re running a WD hitch — I assume a 1200 lb model? — I’d move the car forward and put more weight on the hitch.

The other big variable in all this is how you have the trunnions on the WD hitch set-up. Find a safe location and do a panic brake test. If your front lifts / your front tires prematurely lock, then you need more cowbell, I mean, Trunnion-pre-load. That’s, literally, where the rubber meets the road. You want to load that front axle to make sure you can brake and steer in a highway rubber-neck panic stop. A properly tuned WD set up can literally be a lifesaver here.

Also, you didn’t get measurements on the individual trailer axles — I guess you have 5200 lbs axles? So I assumed you’re well below capacity and aren’t worried about overloading a front or rear axle so long as your trailer is level in all test cases. I have found that getting the axles evenly loaded can also be challenging, but I was dealing with a 30 ft, 13,100 trailer load with 6k axles.

But if you’re running air bags to level the soft Dodge rear (my 2005 3500 dually) has a very soft ride also which complicates things) I would target a higher tongue weight and more trunnion tension.

Adding up the weight #'s doesn’t work well. In order to get all the axles on scales, I had to put the front wheels and the trailer wheels a long ways from the center of their individual scales. My priority was to get a good weight for my rear axle, so that was what I centered on a scale. That said, ignoring the problematic #4 test, those #'s are close enough for me. It’s not reasonable to me to look at 5 passes on the scales that varied not really much at all, and say “weight changes are too small to measure.” Could just as easily be a matter “scales pretty consistent.”

I pulled off the scales to make all changes.

Second, I would argue that there are risks associated with setting up draw bars too tight–stress on the hitch’s fastening points to the frame. I just went out and did some quick measurements of the truck. In order for the moment applied by the WD hitch to remove 140lbs off of the front wheels, the hitch has to put about 1190ft-lbs of moment on the rear hitch-to-frame fastening point.

That’s in addition to the shear and moment forces applied by the weight of the trailer. 140lbs transferred to a 3200lb axle isn’t much. So lets say we want to tell our buddies that our WD hitch xfers 450lbs rear to front, even tho that’s still not a huge fraction of 3200lbs. In this scenario the WD hitch puts 5k ft lbs of moment on the hitch-to-frame fastening point. That seems like a helova lot.

Third, I think the braking scenario might be over-wrought. It’s not at all clear to me that a panic stop lifts the truck’s front end. I think that it would depend on the geometry of the truck’s axles and hitch. My hitch ball is slightly above my rear axle, so maybe a panic stop actually shoves my front end down.

Lets say my hitch ball was a couple inches below my rear axle so under hard braking the truck’s front end would want to lift. Lets say your WD hitch was twice as tight as mine and therefore xferred 300lbs rear to front. Sure, having a couple hundred more lbs on the front tires would help braking a bit, but you’ve got 3-4 axles doing the braking and even if the WD hitch was able to xfer 300lbs rear to front, that’s still only 10% of the weight on the front axle. So at best, 10% improved braking if hitch is lower than rear axle.

Sway. There’s a good article about tongue weight, speed, and sway here. Why Europeans can tow 2x the weight we can - Paddock, Spares and Towing - SpecE30 Community Forum

Yes, 5200lb axles. Trailer is level, but I don’t think that’s a big deal. It’s easy to imagine a trailer that is off-level by a bit yet the weight is still pretty equally shared by it’s axles. If the trailer had no suspension, then being off-level would mean the weight on the trailer’s axles would be different.

Whoa, you’re preloading the WD Hitch with the help of a jack? Yeah, that’s a lot of stress on the snap rings and the trunnion heads AND those dang shear plates (that shear!) if you’re using a Draw-Tite design. They make those WD hitches in several sizes – I had a 750 lb I think that I used with my Class C, then a 1200 or 1400 lb with my 30ft trailer. And I spoke to the engineers at draw tite, they make even heavier gauge trunnions, the advantage being, that when you hit the brakes, the trailer braking force drives the hitch down, lifting your front end. So I encourage you to do a panic stop test – my 1400 lb tongue weight trailer would unload my Dodge’s front tires and I’d lose braking and stopping to a degree that was horrifying. And that’s with a 1,000 lb Cummins engine in a 3500 dually quad cab. So the force at the ball can be very surprising. On my Class C, because the hitch was so far from the axle, and open trailer with no WD hitch would literally lift the front wheels off the ground!

But I’m concerned that you may have too much preload in the WD system if you’re using a jack to get the snap rings up.

Larger trunnions with less preload will give you the panic braking protection you need. If that was the WD system you used for the open trailer, maybe you need a larger one?

But your front tires definitely unload in a panic stop. Your hitch point is probably … 3.5 or 4’ from your axle center, line, so that’s the leverage.

When they’re set up right, they’re awesome. I love my GN because I no longer have to mess with the WD hitch set up (or carry the spare parts for when the head bolts strip).

The other problem you can have is if you don’t have enough tongue weight and too much WD, you can send the rear of the truck airborne – I had my car too far back for the WD hitch once and hit bad potholes in Ohio and the full-pressure dually tires launched the truck airborne and it tried to jacknife while going straight at about 60 mph.

We immediately pulled over and rolled the car forward, but my buddy who was following said my trailer got 35 degrees to the lane! Had there been a vehicle next to me on my left, I would have punted them out of their lane.

These trailer set ups can be trickier than setting up a race car.

It’s a 10k lb Harbor Freight WD hitch. I got it in 2012. A couple years later I went to the scales to play with things and found that the hitch was only moving 60lbs from the truck’s rear axle to front. That didn’t seem hardly worth doing, so that’s when I started using the trailer jack to lift the center of the rig a bit so I could tighten the draw bars (trunions) another chain link. I don’t think I’m over-doing it, but I push back when people suggest I make it even tighter.

First you were concerned my drawbars weren’t tight enough and now you’re concerned they’re too tight?

The idea of breaking lifting your truck’s front wheels has to be geometry dependent. The rear axle would be the fulcrum around which the front axle would either get more normal force or less, depending on the geometry. No way the two cases, hitch ball below the pivot point vs hitch ball above, would have the same effect. As I sit here and think about it, the height of the trailer’s center-mass would play also.

Pls read this with a smile on your face. I know I seem argumentative, but I do enjoy debating issues with folks informed enough to have thoughtful opinions. Among other charms, the discussions force me to go back and re-analyze my ideas. When folks make a good case that I’m wrong, they do me a service. I don’t like being wrong so being corrected makes me less wrong.

LOL – I know it sounds crazy, but if you’re preloading it with a jack to get the snap-rings up, and you’re still seeing so little weight transfer, I suspect the Harbor Freight trunnions are weak.

I’ll go take a look at my old scale slips and see if I can determine how much weight mine was transferring … I’m sure I ran scale #'s at some point with and without the WD bars … that might a very interesting comparison point. Let me try and dig those out and see …

Re. HF trunions might be weak. Remember the #"s up above. In order to xfer 140lbs rear to front, 1190 ft-lbs of moment has to be applied to the hitch to frame fastening point. Wouldn’t want to put much more stress on that fastening point.

Ah shit. It’s more complicated. There’s a whole 'nother thing going on. What I described above should be accurate. But the trailer is also going to want to rotate over it’s axles and shove it’s tongue down. That will definitely reduce weight on the truck’s front axle and the action will definitely be resisted by a WDH hitch. I can’t guess at those numbers tho. The interactions have become too complicated.