It seems like everyone agrees that a thinner diameter rear sway bar is the ticket. I would be afraid to try and Ireland offering but has anyone tried one of these? I assume I can use my own adjustable endlinks with spherical bearings. This is 16mm with three adjustment holes. 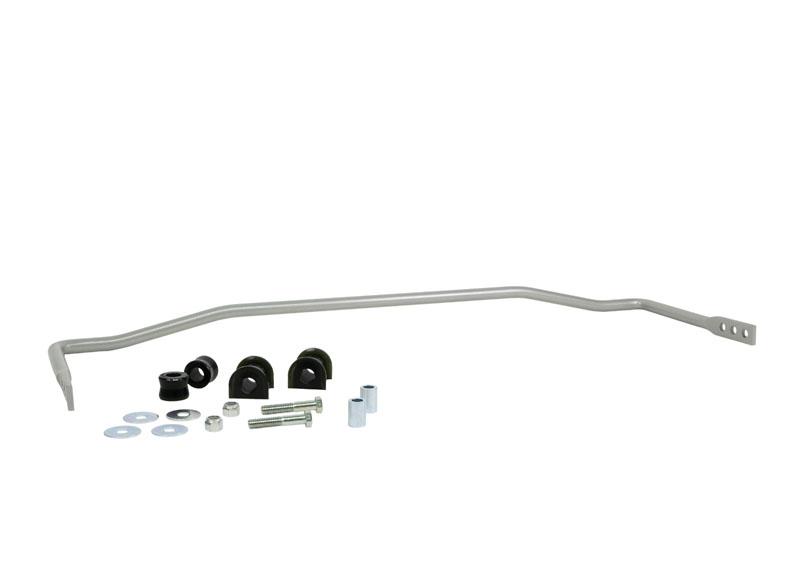 TMS and ECS sells these.

There is no consensus that a thin rear bar is better. I bet that most folks have not changed their rear sway. Imo, it depends on how much you lift your car with the new springs. As you know, with the old suspension our front ends were sitting on the strut bumpstops. So our old front springs and front swaybar didn’t have as much impact on front handling as we thought. But now we have the ability to raise our fronts off of the bumpstops, so our front springs and sways can now work like they are supposed to.

The result, in terms of F/R roll resistance, varies. All I did was loosen my rear bar a tad.

That marketing blurb is foolishness. The purpose of reducing body roll is to keep one’s tires more vertical, not attempt to spread lateral loads more evenly.

I’ve got the 16mm rear bar (from UUC). I generally have it on the medium stiffness setting and like that setup a bit better than the larger bar on the softest setting. Somewhat depends on personal preference and how the car is otherwise setup.

I’m struggling to understand why you’d afraid to try the IE bar. Can you help a guy out?

I will be diplomatically blunt because I realize IE had some fans on this forum. I think their products are junk and their customer service (I mean Jeff Ireland) is not far behind. I will give you one example (there are more than one). I bought their Heavy duty rocker arms for the M20. Had the entire head redone with these installed. After one session the pads that touch the cam lobes became lose (like you could wiggle them with your fingers lose). This in turned destroyed a Schrick cam and caused me to have to pull the head again, buy a new cam and do this entire job over. IE never once apologized for anything or showed any type of concern over what happened. IE begrudgingly refunded the price of the Rocker arms, but this in no way covered my expenses to clean this up. The Cam alone is $600. I should have known when these arrived that they were shit made in China. The castings were sloppy and looked like pot metal. I have addressed this elsewhere on this forum so I will stop here. You asked, so there you go. By the way all the head assembly and reconditioning was done by a very reputable race quality machine shop.

Thanks for getting back to me. I don’t remember if the new SE30 suspension package includes sway bars? If not people are still running the stock 12mm rear bar. This is kind of small. I was considering going back to that on my car, but I feel its to small to make a difference or do much of anything under race conditions. It also does not support adjustable end links. It seemed like a 16mm bar was a good middle ground VS the typical 19mm rear bar. My rear bar is 19mm and its a suspension techniques bar with only 2 adjustment holes at the bar ends. The 16mm WhiteLine sway bar I mentioned is backordered until mid june. I just contacted UUC to see if they would sell only the rear 16mm bar. It looks similar to the whiteline bar. Will let you know. My last resort is to use an OEM rear bar from an E30 M3. These are like 14.5mm and would probably get me in the ball park despite the same fixed endlinks. I have been running without a rear bar and it’s not that bad, but the car does have a tendendency to push. I am trying to get it to be more neutral.

I have had no bad experience with them, but then I used to live near there. I’m not a person to make blanket statements about Jeff or the company. So I’ll just leave it alone. I think the issues with their rocker arms only extended that far. and in my experience his other parts, especially suspension have always been long lived and good quality. Still, it’s not my job to defend IE, and I’m not here to do that. I use the IE bars, and they have been on my car since 2007.

You asked so I filled you in. I have had other bad parts from them. The issue with the rocker arms cost me a lot of time and money. Jeff knew all about it and choose to remain in total radio silence. Most customer service people would have called back, apologize, and then asked what they could do to make it better. So in my mind (and pocket book) these actions are indefensible. I made a video of how bad the rockers were but I choose to not post it publically. I have been shopping elsewhere for a # of years now.

Yeah, I understand… No dispute about their lack of empathy on the issue of rocker arms.

I will always feel badly about the IE HD rockers. I found that Metric Mechanic had tested them and found them significantly stronger (40% maybe?) than OEM. So I bought a set and tested them, and ultimately and got them approved into the rules. I’m still running the same IE HD rockers from that test, but it’s clear that there were bad ones. I agree that IE did not handle that issue well.

Metric Mechanic has recently come out with fiercely strong all-steel rockers. Same weight as OEM, just no AL. The MM rockers are pricey compared to OEM, but not pricey compared to other aftermarket rockers. I’ve not been too successful lobbying for their inclusion tho.

Re. rear sway sizes.
No, there was no sway bar change involved in the rule change re. springs. The rule was 19mm for the rear prior, and remained 19mm thru the spring change. Later, at the Sebring Champs, a desire was expressed to allow smaller rear bars and the text of the 19mm rule was “reinterpreted” to allow it.

Hey, just spoke with Arjun at UUC. They are sending me out the 16mm rear bar.
Thanks for the tip.

Could not spot the steel rocker arms on the MM site. What do you mean by “AL” ??

@dstevenson,
Don, I am not speaking for Scott, but it would not be a stretch to assume that AL means Aluminum. Though, Aluminum might be a stretch. You know, because it’s softer.

Running the UUC 16mm bar on the softest setting. Seems to be just right so far. UUC will struggle to send correct mounting hardware for an E30. Made do with what I had.