Tightning up your oil pan baffle

As most folks know, we have issues with keeping the oil pump’s pickup submerged in left sweepers. The pump’s pick up port is on the left and at high rpm our oil level can get quite low. Add a g of lateral loading and it’s easy to imagine how the pump’s port can become uncovered and then it sucks air.

Grab your spare oil pan. Imagine the oil pump pick up in it, with it’s port to the driver’s side… Now imagine only 1" of oil in the sump, which totally happens, if only briefly in extended 4th gear accelerations. Now imagine the oil level at 45deg, piling up on the passenger side, and you can totally see how the pump’s pickup can become uncovered.

Most folks know to put in an extra quart. But that only buys you 5mm of oil. There’s a thread here somewhere about installing a little door on the driver’s side sump in the oil pan. That little door is an iX part. But what you can also do is tighten up your oil pan baffle.

All the baffles that are sold are leaky as heck. They don’t seal well and they don’t seal the rear of the sump hardly at all. What I tried to do is see how much hole the baffle really needed to get the oil pump’s pickup thru the baffle.

After playing around a bit, I decided that I might as well use plastic for my add-on baffle.

The first pic shows where I started. The baffle is obvious and you can see that it’s sealed all the way around so no oil can leak by. The AL is actually L shaped so there’s lots of surface area for the JB Weld to adhere. I’ve been using that pan for 7yrs so it would seem that JB Weld is right about their claim that their stuff is resistant to petroleum.

What you can’t see is that underneath that AL L shaped piece is it’s twin down below. There’s actually two layers of baffling there. Originally I was going to drill thru the pan to help fasten these baffles in place, but I figured that I’d give it a shot w/o putting holes in my pan and see what happens. With all the OP warning lights in my cockpit, I figured that there was no way I’d suddenly have an OP problem and fail to recognize it immed. And it’s worked fine all this time. JB Weld ftw. 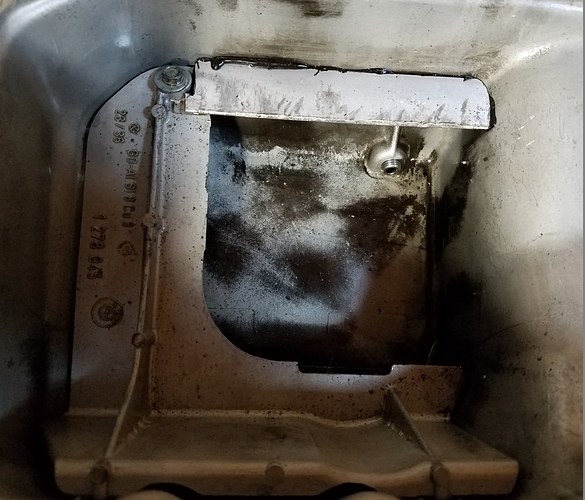 Then I cut a piece of plastic and kept test fitting it until I could just barely put the oil pan back on. Here’s what the plastic looked like vs. a conventional baffle. Because I don’t have a block oil pressure relief valve, I don’t need the big whole in the baffle. 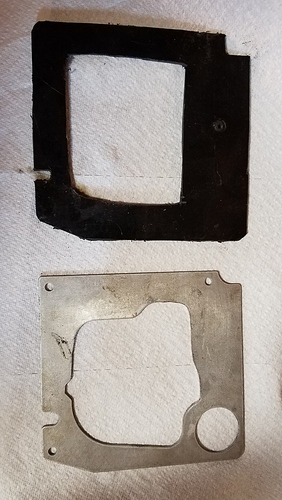 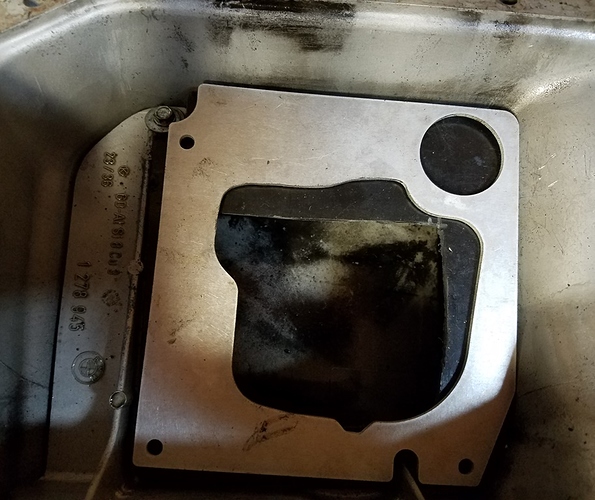 This is what it looked like before fastening the plastic piece in place. 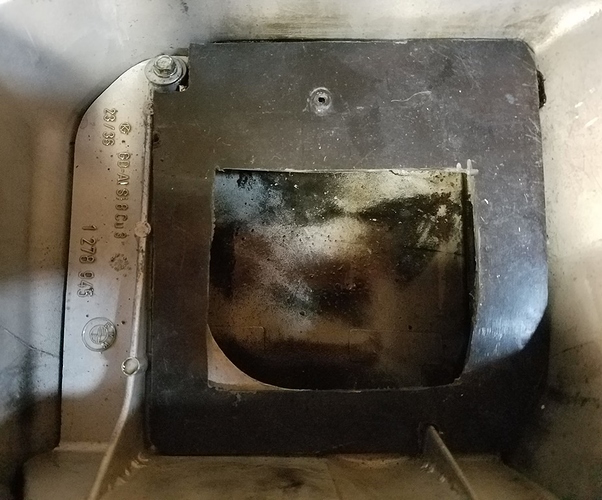 So, there’s some ideas on improving your oil pan’s baffle. Just don’t button it back up until you’ve also installed a little hinged door in the driver’s side.

Later edit. Ah hah! I found a pic of the lower baffle. If you look closely at the below pic, you’ll see that my piece of angle AL is about 1" below the conventional baffle level. Note that the AL angle is not at 90deg. I banged on it a bit so it’s prob more like 75-80deg. This was necessary because the pan’s side isn’t vertical so 90deg doesn’t quite work. 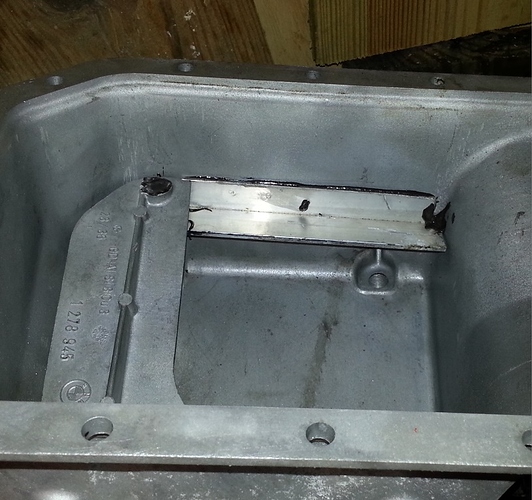 Hi there, so I notice there are two oil dipsticks in my M20B25 engine. So are there two oil sumps in this engine?? Which dipstick do you use to gauge the fill of oil in an oil change? So do you have to empty out both of the sumps.? Or if you empty from the one oil drain plug , the other side will empty out too? How much oil do you use to do an oil change? Please advise, this e30 is new to me, Im a little confused. Thanks so much for your help.

Need a picture. The engine has only one dipstick. 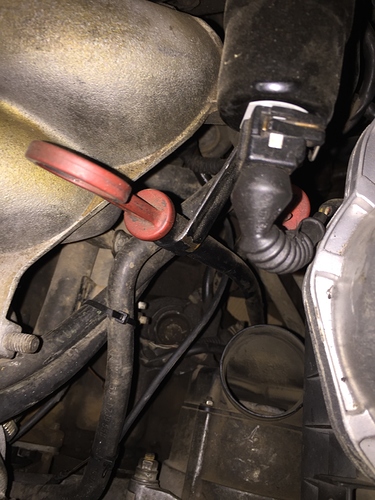 oil dipstick.jpg2448x3264 1.8 MB
The oil on the two red dipsticks looks like engine oil, both look like a dark oil, not exactly black, but dark… Nothing pink looking, and there is another dipstick in the back and on that dipstick, the oil is pink, looks like transmission fluid.
redpeppa 2021-03-12 08:45:45 UTC #5

The transmission dipstick is close to the firewall, its not in this picture, but the oil thats on it is pink, looks like transmission fluid. Cant send you a pic because as a new member Im apparently allowed just to post one picture or maybe not, here it is 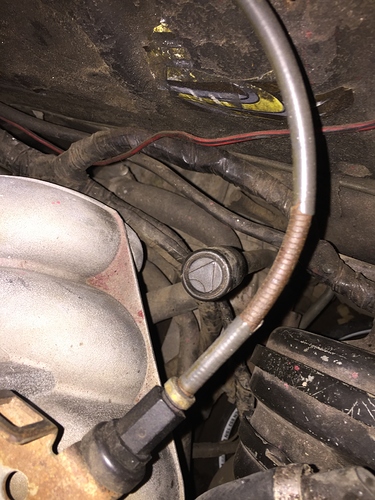 heres another view of one of the two above red dipsticks, the handle was broken off 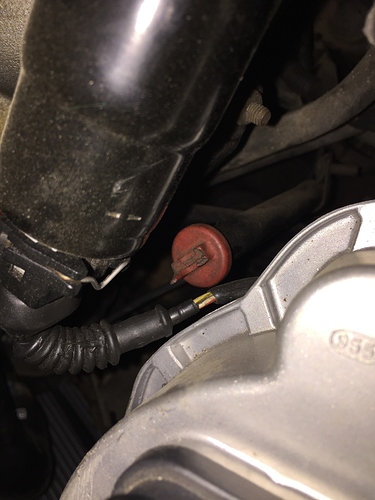 Maybe you have an automatic transmission? I don’t know anything about E30 Auto’s, but many transmission fluid types are red. Certainly manual tranny E30s don’t have a second dipstick.

There’s lots of kinds of transmission fluid, many of them are reddish. If whomever changed your tranny fluid last knew what they were doing, then I’d assume the fluid was a reasonable choice and I’d ignore it’s color. But if it’s eating at you, change it again.

I looked at it again, The two dipsticks at the bottom are going to the engine. So for some reason this engine has two oil dipsticks. And the pink/reddish dipstick is going to the transmission. Im going to change the engine oil tomorrow and see if both sumps empty out. Ill keep yall posted

Yup, its definite;y engine oil. Two dipsticks for the engine oil. When the old oil was emptied out the the new oil put in, both dipsticks showed new oil, not the dark oil as before. not exactly sure why this engine has two engine oil dipsticks and apparently two sumps. I think the engine is from a 525E . Ive searched and found a diagram for a 528e automatic and it shows two dipsticks but dont know what they are for. . Any thoughts? thanks.

No, no thoughts. I’m still dubious re. there being 2 dipsticks that go into the oil pan, but you’re the one looking at it, not me. The question would be better posed to people more familiar with automatic transmission. I’d go to the R3VLimited fb bage.