Have problems with your rear toe settings staying put? This might be your solution.

These spherical rtabs do not require modification of OEM parts, therefore they are legal. Shawn has blessed them.

I installed these about a month ago. The installation was a little trickier then conventional rtabs, but I ended up with trailing arms that don’t bind at all. Not at all. Once installed and adjusted for toe and camber, with no shock connected and the spring removed, I could lift and lower my rear wheel with one hand easily. Even tho the trailing arm pivot points were a bit non-coaxial, there was no binding.

I raced on them last weekend. I did not sense a difference, but then I didn’t expect to. The important thing is that my toe stayed where I’d set it before the race–always a problem for me.

We’ve long had problems with our rear toe staying put. There’s been a number of reasonable theories. One was that the H&R Race springs bound up after only ~1.5" of compression and then became a fulcrum that put huge force on the rtab. Another explanation was that fastening one’s trailer’s tow straps down tightly to the rear wheels causes rear toe to shift. I don’t have a definitive answer, but I can tell you that after 3 SpecE30s, each with a different adjustable rear toe/camber kit, my rear toe was always a challenge. There were events where I couldn’t do a couple laps w/o losing rear toe. Some of the adjustable toe/camber hardware, I just plain busted. There’s a lot of force going on back there and I think that the fact that, once adjusted for toe and camber, our off-axis trailing arm pivot points bind is a contributor to the problem.

The binding is hard on the ears, adjustment hardware, and fasteners. 2 months ago I sheared one of the 12mm IE rtab bolts. Last weekend it happened to Fred Switzer. If the binding is hard enough to eventually shear 12mm bolts, it’s no wonder we lose our alignment settings.

Installation of the spherical rtabs might be a little harder then standard rtabs. I tried to do it with the subframe still in place, but was defeated. The ears on my subframe were a little beat up, and the spherical rtabs also kept hanging up in the IE adjuster slots. Once I dropped the subframe, and therefore could really see and mess with the rtab ears, the problems were easy enough to overcome.

Buy this, or something similar. Not only will it help you get your old rtabs out, but you will need it to install the new rtabs straight and true into the trailing arms. BMW Rear Trailing Arm Bushing Removal Tool - E30, 318ti, Z3 - AKG Motorsport

Remove your trailing arms and subframe.

Remove your old rtabs. There’s lots of videos on this. Your rtab tool will be handy.

Install the spherical rtabs into your trailing arms.

Carefully inspect the rtab ears on your subframe. The inner surfaces need to be nice and smooth so the spherical rtabs will slide in easily. The picture below shows the area that I mean. 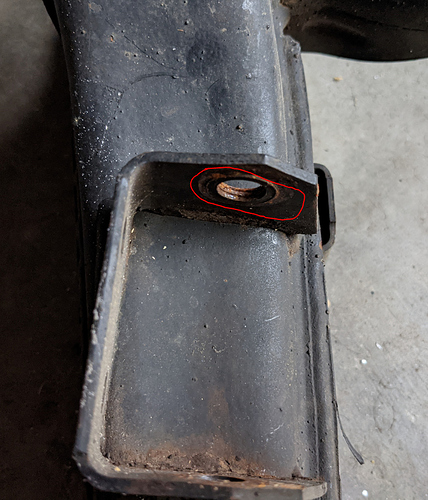 You may find that the rtab ears on your subframe have been bowed in a bit by tightening the rtab bolts quite hard against various types of rtabs. If your rtab ears are bowed in a bit, you’ll have to bow them back out. I had to do this at all 4 rtabs ears on the subframe. Took only a moment to rig up a little tool to help spread the ears a bit. I had to spread them by ~1.5mm. I installed these a month ago and my notes seem to have disappeared. My recollection is that the rtab ears needed to be at 72.5mm apart to get the 72mm spherical rtabs into the subframes ears. 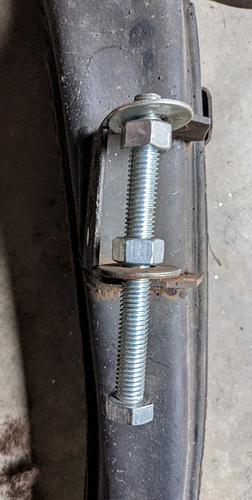 If you have one of the adjustable rtab solutions that required slotting of your rtab ears, you might run into the problem of the spherical rtab catching in the slot and preventing the trailing arm from slipping into place. Get the ears nice and wide, get the spherical bearing pretty straight inside of the rtab, and then as you slide the trailing arms into the subframe ears, keep the spherical bearings straight. See the pic below. That rtab piece that is caught–see how it’s shifted to the right? Because it’s shifted, the circled part is standing kind of proud and it’s catching in the IE adjuster slot. This will prevent the rtab from going all the way in. The straighter you can keep the spherical rtabs, as you push the trailing arms and it’s rtabs into the subframe ears, the less likely circled part will become proud and catch in a slot. Having the rtab ears spread nice and wide helps too. 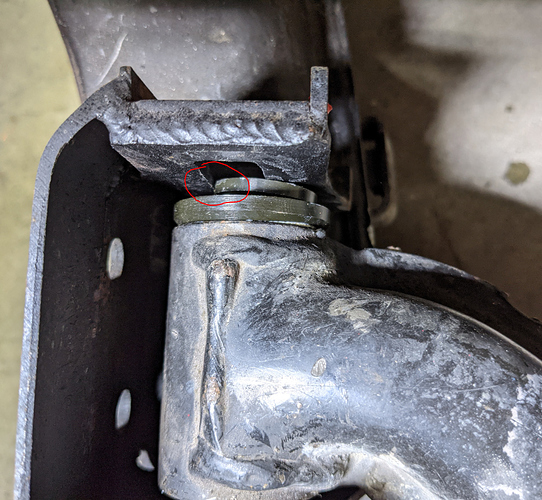 Getting the bolts thru. If your trailing arms use 8.8 hardware, this is the time to get harder fasteners.

Since the rtab holes that the bolts go thru are free to move a bit, you may have to work the rtabs a little to get them to line up with your holes/slots in your rtab ears. You can’t just move the trailing arm around to reposition the rtabs because the latter is free to pivot. In the pic below, you’d never be able to get the bolt thru because the hole is not centered on the slot. You may have to screw with the spherical rtab a bit to coax it to get more centered so you can get your bolts thru. With your subframe removed from the car tho, it’s easy to see exactly what the problem is, and if you can see a problem, you can solve it. 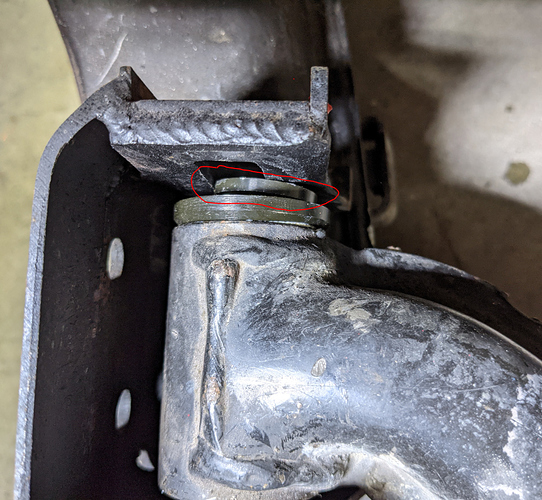 This may be a dumb question (or secret sauce), but what camber/toe are you looking to get?

Are there spec cars running with standard RTAB’s that dont adjust (and are in the same axis) and are these competitive or significantly off pace (or harder to drive?)

In the rear I try to get neutral toe and -2.5ish camber.

Trailing arms and the rear subframe aren’t that strong. Something gets a little bent and one has to change their settings, replace parts, or try to bend it out. Bending has become a common solution for rear alignment, especially for toe.

If I had it to do all over again, I’d be curious as to how it would work out long term putting in only camber adjusters and leaving the toe alone. But just one adjuster makes the pivot points non-coaxial.

The last time I had a SpecE30 w/o some kind of rear alignment adjuster was 2007 and not only do I not remember what my alignment settings were, but I really had not the first clue about anything–I could barely change the oil. I expect that there are some cars that don’t have adjusters, but I can’t give you any names off the top of my head.

I have lots of bent trailing arms (a 3/8" 24" extension works great to determine if they are bent once uninstalled). I have considered trying to “fix them” by making a jig but never got around to trying it. Seeing as how much force it takes to bend them I think a press would be needed (or a truck and tree).

I don’t have any adjusters at all, just curious as to how much i’m “leaving on the table” in respect to rear alignment.

I expect that there are some folks at -3 rear camber, and some folks like a smidgen of toe in like OEM.

If someone was really obsessive and had adequate time and money, they could compile tire temp data for every track and test track-unique alignment and corner heights. I’m just there to spend the weekend with my buddies and to do what I can to help everyone have a good time.

Install tip: put bushings in freezer and heat metal with propane torch. Bushings will slide in by hand. Just don’t get metal too hot.