Solar power in the paddock

Bottom line is quiet and reliable power in the paddock.

How the project started. I have a couple big batteries in the trailer. They run lights, small air compressor, occasional power tools, blower for air mattress, phone and notebook, and electric banky in the winter months. Usually I can connect to paddock power, but not always.

No matter what kind of power the trailer is connected to, the batteries charge. I just got a better charger so they’ll charge pretty hard if I have shore power. With 2 big batts, if you’re going to do some serious charging you can’t just connect a standard 10A charger and call it good. That’s only 5A/batt which would take 20hrs to charge a big depleted 100A/hr marine battery.

Also, whenever the trailer’s electrical cable is connected to the truck, it charges the batts too, altho the charging rate both to and from the truck seems current limited to 3-4A by something hidden in the truck’s electronics. Altho it’s cool to charge the batts as I drive to an event, it also means that the potential exists for the trailer to flatten the truck’s battery if I have a lengthy attack of careless and stupid.

The saga of the generator.
My $88 Harbor Freight Generator is a loud POS. It’s not died yet, but I dislike the way it’s volume makes me a bad paddock neighbor. I have another bigger HF generator that is quieter, and I’m tempted by the latest HF gensets that are even quieter still. The big 100lb $700 generator that HF is selling now is particularly quiet. But with my luck I’d buy the thing and after forcing my poor trailer to haul another 100lb and accepting the loss of floor space consumed, the damned thing would fail the day after it’s warranty expired and I’d be out $700.

So I got to thinking about solar power.

I spent a bunch of time wargaming the idea of putting the solar panels on the trailer’s roof. Obviously there’s some efficiencies there. But my trailer is a POS and I worried that I’d cause my roof trouble and I’d regret it. It’s not just about plugging the holes, it’s about weight where the frail roof structure currently supports none, and it’s about how vibration of the panels being blasted by 65mph wind might open up the seams in the sheets of AL that are only pressed together.

If you looked at the seams in my roof you’d ask yourself "how is it possible that those 20yr cheap-ass press-fit seams aren’t leaking?

So I decided to fasten hinges to the two solar panels such that I could easily store them in the trailer, carry them out to the truck and lay them down on the truck’s tonneau cover.

The panels are heavier and more beefy then I thought they would be. Sometimes what I buy for not much $$ ends up being crap. But not this time.

I went thru a couple ideas re. hinges. Fortunately the AL frames were tough enough to deal with all the holes I drilled as I tried out the ideas.

The pic below shows the 2 panels laid out on the back of the truck. Because of the way I did the hinges, you just put the panels down and then flip them open. As you can see, the panels are small enough that moving them out of the trailer to the truck is no big deal. 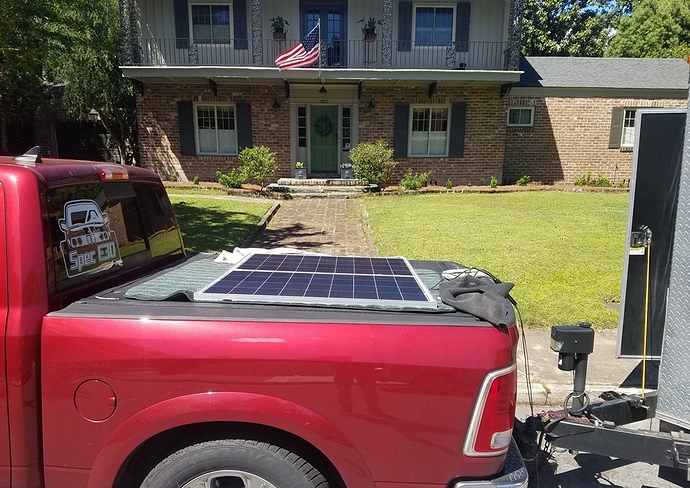 The controller for the solar panels is pretty straight forward. It’s about the size of a paperback book. When I first plugged everything in, the controller showed a charging current of >8amps. The controller has a bunch of modes to monitor all sorts of things. 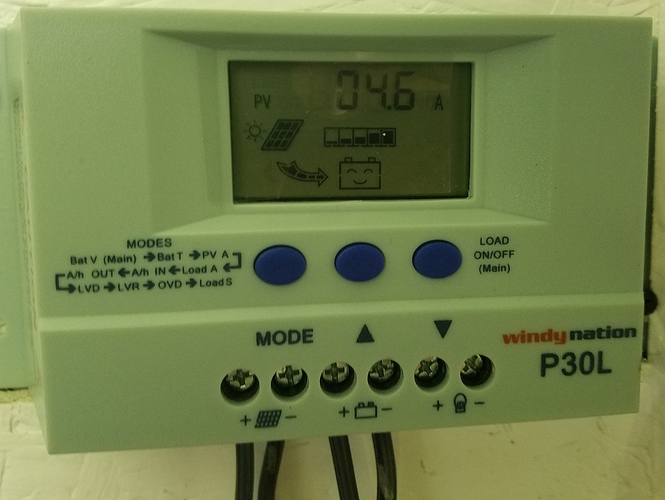 The pic below shows the folded solar panels stored in the trailer. I figure that I can unfasten them from the trailer wall, fold them out on to the back of the truck, and connect the wires, in about 1min. A little less if I put the beer down and use both hands. 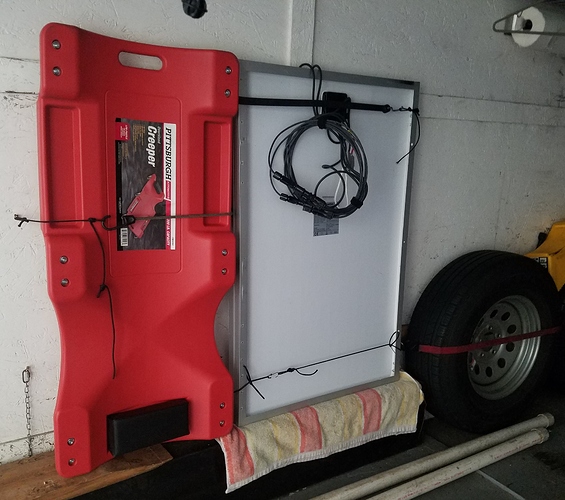