Why. My ABS light isn’t very visible. I have gauges and a data logger on the steering wheel cowl, and then there’s also the steering wheel itself blocking the OEM ABS light location. If the light goes on during a race, it won’t grab my attention. I learned 2wks ago that knowing your ABS just failed can be important in the middle of a race.

I have an early model therefore it has an ABS relay with fusible link. I remoted the fusible link by installing a circuit breaker. Having to buy a $40 relay every time the fusible link goes is a pita. Having the circuit breaker on the dash, creates the possibility that one might be able to get their ABS going again right in the middle of the race. If you have a late model, you’d have to figure out the wiring in going to the ABS computer in order to do this.

Remoting the ABS light. Pull out your cluster. There’s a wire pair that goes to the ABS light. The back of the cluster is marked so it’s easy to identify. Run the grey/red wire to your light. Connect the other side of the light to key-on 12V.

The pic below shows my center console gauges and switches. On the left side is the new ABS light. I used clear label tape for the ABS on it. Just below is the 5A circuit breaker. If it blows, it pops out a bit under it’s flexible clear cap. To reset the circuit breaker you just give it a poke. 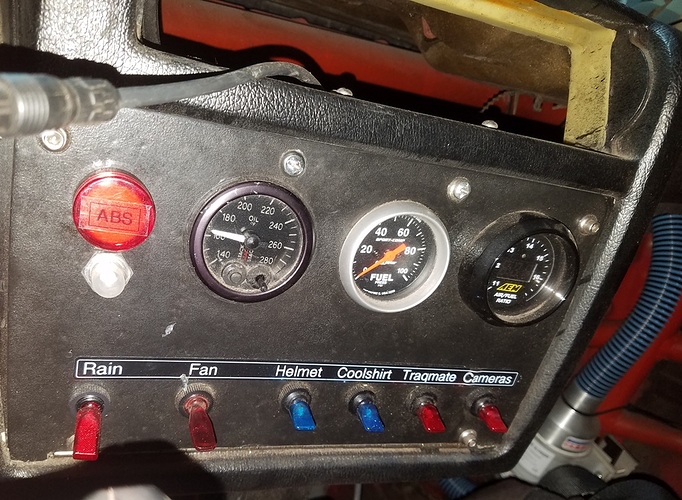