It’s long annoyed me that when I slow or move, when pulling my 24’ trailer (7400-7800lbs), I can feel movement. That is to say, something isn’t tight in the hitch assembly that allows the trailer to go “thunk” towards me when I brake and then “thunk” away from me when I move from a dead stop. So today I decided to look into it.

Help, my shank is small. The first thing I found is that my hitch ball had a 1" threaded shank and I’d fastened it up, years ago, thru a 1 1/4" hole in the hitch. It’s not clear to me whether or not the 1" shank in the 1.25" hole was responsible for some of the fore/aft movement of the trailer. But as I got to looking into “why is the ball shank smaller then the hole it’s fastened into”, I found that my ball was only rated at 6000lbs. What I should have had is a hitch ball with a shank of 1.25" dia. Those are rated at 10k lbs and up. My shank is no longer small. 1.25". That’s “diameter”, baby.

The small hitch pin. The fact that there is play in my hitch pin was definitely a contributor to the irritating fore/aft movement of the trailer. It looked to me like both the receiver and the hitch shank, not ball shank but hitch shank, could handle a hitch pin about 2mm larger in dia then the 5/8" in that I’d been using forever. 2mm play in both meant 4mm of total freedom. No question that this was a contributor to the fore/aft movement.

The problem was that neither the receiver nor hitch shank was quite big enough to handle a 3/4" receiver pin. But if I could have found one today in town, I’d have drilled the holes a teensy bit bigger so that a 3/4" receiver pin would go in if one coaxed it with a hammer. So what I did instead is buy a 3/4" bolt and grind the threads down until it just barely fit thru the holes. I drilled a hole near it’s end for the retaining clip. Then I painted it to slow rust and banged that bad boy into place. I didn’t bang it with my newly larger ball shank, I used a hammer, but you know that shank was nearby.

So, not only have I removed the irritating for/aft play in the hitch, but the hitch is now significantly stronger. Win.

Pictured is a SS hitch ball with a 1" shank. I didn’t end up using it because I bought the SS ball before I realized that what I really needed was a ball with a 1.25" shank. Also in the picture is the 5/8" hitch receiver pin. 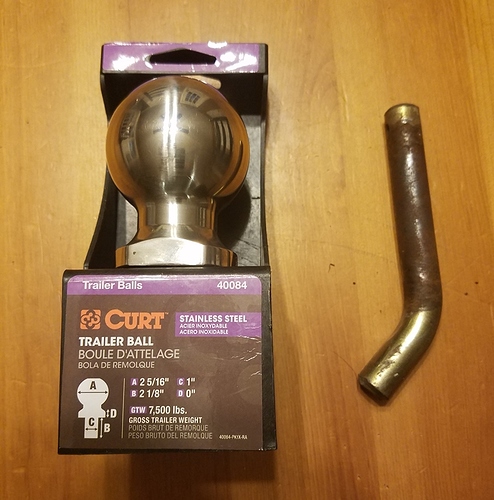 I’ve felt the same thing with mine. I already have a Curt 40030, which is a 15,000 lb rated 2 5/16" ball with a 1.25" shank, but I think I can improve the pin. I don’t really see a lot of play, though. Not enough certainly to give the kind of movement that I feel when I tow, and accelerate with slack or brake with slack. I wonder if there’s something else, like the ball and the hitch aren’t as tight as they could be.

BTW, if you have a good ball already, and want to just reduce the play with the 1" shank inside a 1.25" opening, you could also get a reducer bushing. 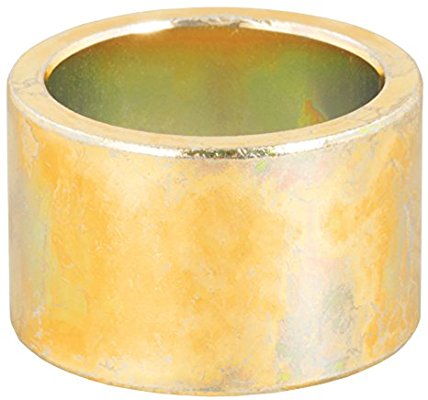 I looked at the idea of a reducer bushing to make my 1" ball shank fit better, but it just all seemed boil down to…the weight of an enclosed trailer should drive one to a 1.25" ball shank.

The old hitch ball that got removed came with my first trailer that I bought used in '07. It is prob 20yrs old. And looked it.

Totally agree, no good reason to stay with a 1" shank. Just throwing that out there. As cheap as new balls are, there’s no reason to not get the absolute best one you can. My trailer is rated at 7k (two 3500 axles), and my truck at 7500, I think, but the ball is 15k and the coupler thingy is forged and rated at 17k with a tongue weight of 2550. So the trailer and/or truck will determine the practical max. Thinking about changing the axles to 5200 lb units, so the truck will be the limiting factor, making future tow vehicle decisions easier.

How heavy is your loaded trailer and what kind of truck do you have?

I would go weigh your rig. I bet you find that fully loaded with tools, ice chests, fuel and tires, you’re 1000lbs heavier than that.

That said, the idea of a “tow rating” is surprisingly wiggly. The Europeans will happily tow 2x as much weight behind a comparable rig as we would. Our series of tests that ID tow ratings are really all about hp and cooling system. A big engine and radiator gets a high tow rating and a small engine and radiator gets a low one. My Ram Ecodiesel has only 240hp and it’s radiator is kinda small. So the tow rating for my truck is 2000lbs less than the V8 Hemi version of the truck. Everything else about the truck is the same.

One of the tests is a long drag race up the side of a mountain, and another test is a short WOT thread launch up a very steep incline.

I don’t tow up over a mountain pass each month to a race, so those tests of engine power are a bad fit for how I use my truck. Heck, I’ve never gone WOT in my truck.

People talk about tow rating capacity as if it’s clearly a safety issue. But our modern suspension, stability nannies, and chassis stiffness make our trucks 1000x safer to tow than what was perceived as perfectly adequate 20yrs ago.

It’s not about tow rig weight and “tail wagging the dog” either. With the same engines, 3/4 ton single cab truck will weigh less than a 1/2ton crew cab.

So if your van handles the load ok and the engine seems comfortable with the aero drag, your van might be ok with it. Of course, there’s the issue of lawyers so if something bad happens, just encourage the locals to scavenge a 1000lbs worth of trailer contents before the lawyers arrive. In a courtroom, common sense can be the first casualty.

One thing I did to give my trailer better towing manners is drill a 2nd hole, for the receiver pin, in the hitch shank so I could shove the hitch deeper into the receiver. This puts my hitch ball about 2" closer to the truck’s rear axle. That distance, between hitchball and rear axle, is the lever arm that the trailer uses to move the truck around. As a result, I reduced the trailer’s ability to move the truck by ~10%.

Before a person does any drilling of their hitch receiver tho, they need to check the clearance between their back bed gate and their trailer jack. If you put the trailer too close to the truck, the tailer jack may block the bed’s gate.