Circuit breakers on the dash

We all have aftermarket gauges and switches, and most of us have some fuses installed to protect things from getting to sparky. An easily accessible pushbutton circuit breaker gives you a means to attempt to recover a circuit while on the track. Just today I found that there are also circuit breakers for the other fuse types in common use, even if their small form factor would make them likely a paddock fix instead of a “in the middle of racing with your buddies” fix.

Over the last couple years the charm of circuit breakers over fuses has been apparent a couple times.

At Rd Alt a couple yrs ago my ABS failed in some bizarre way that resulted in the car getting suddenly turned around at high speed in a fairly light braking zone. When the car came to a rest, and my eyes transitioned from “wide as saucers” back to normal, I saw that my ABS light was on. Afterwards I wondered if things would have worked out differently if I had an easily resettable circuit breaker on the ABS instead of the fusible link that early E30s have. ABS electrical fuse blows? Give the circuit breaker a tap with a finger and see if Lady Luck is shining on you that day.

After the ABS incident, I wired the dash ABS light to something much larger and put in a pushbutton circuit breaker like the ones near the bottom of the pic. The pic is not from that car tho.

Playing around with the Matthew Agurkis car, I’ve wired in a fuel pump over-ride switch and moved the fan switch, giving both a push button circuit breaker. The “alternate power to fuel pumps” idea was an attempt to solve a problem that turned out to be not electrical, but I liked the idea of an alternate means to power the fuel pumps so I left it in. In addition to providing an “oh shit” means to bypass a couple OEM possible failure points, the surge tank is slow to pressurize fuel to the rail on startup and having to run the starter 3-4x to start the car was irritating me.

Until today, I had no idea that ATC/ATO fuses, like are pictured in the top of the pic, can also be found in circuit breaker versions, that is to say, you can reset them if they blow. That really seems like a great idea to me. If you have an electrical problem, being able to spot that the circuit breaker is tripped because a little button is poking out proud, and being able to reset it to check if the problem has gone away, is a great time-saver.

Since a lot of us are using ATC/ATO fuses, this is a helova lot easier then wiring in separate push button fuses. The downside is that the ATC/ATO circuit breaker button is probably too small to reset right in the middle of a battle with your buddies. 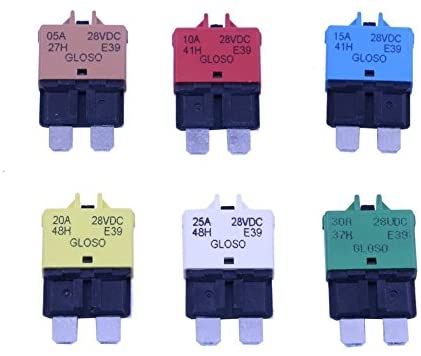 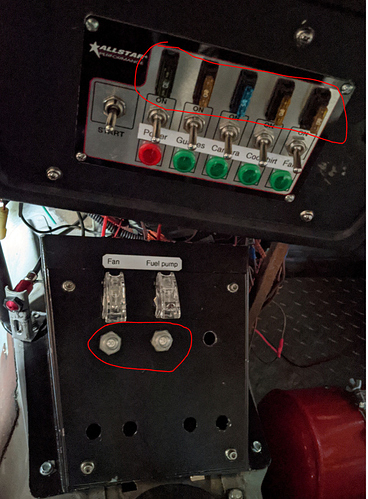