Rokas Stasionis makes a tunnel mount shifter that is not only inexpensive, but also has adjustable throw. From our conversation, it also sounds durable.

This could really be a good piece. There’s cheaper tunnel mounted shifters, but afaik, none of them have a solid steel shaft like this one does. In 2014(?) I busted a cheap one that had a plastic filled AL shaft. To make it worse it was at the national champs and it was Shawn Méze’s car.

What really got my attention tho was the adjustability. I have 2x of the AKG tunnel mounted shifters, and I’ve played around with the Bimmerworld version. Imo they are too short. The short geometry creates a requirement for precision that is a pita. With Rokas’ shifter one should be able to change it’s geometry from what has become normal for SSK’s to something more reasonable.

His email address is stasionisr@gmail.com.

Note that his normal shifter knob puts the shifter a couple cm below the AKG with it’s tall knob. I’ve asked him to make me a shaft that is a couple cm taller than normal such that the top of the knob is 30-32cm above the tunnel. 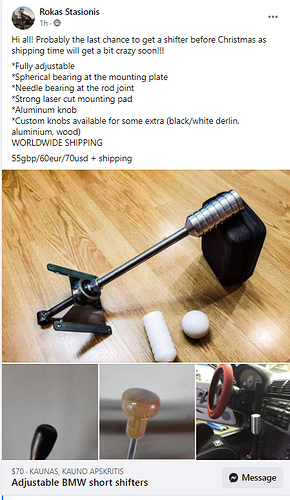 I rec’d the shifter.

The rod is solid steel. No way it will bend or break. The bearing and the arrangement to support the bearing looks beefy. The shift knob looks robust. It fastens on with a set screw, but I might put some epoxy in there to help ensure the shift knob can’t move.

This first pic shows how I have the Rokas shifter laying next to an OEM shifter.

The length of the shaft and knob would put the top of the knob 30cm above the tunnel. In the pic the shaft is adjusted all the way down with 7cm of thread showing. The shifter’s pivot point is above the tunnel, similar to the AKG design.

The way the geometry of “short” works is that more shaft you have below the pivot, the more “short” the action is. The 7cm of threads gives you plenty of flexibility for choosing how short you want your shift action to be. Altho “short” sounds cool, it also increases the need for getting your shifts precisely right. At some point, “short” becomes too damned short and it will cause problems. I’ve made my AKG tolerable only by putting on a much taller shift knob which had the affect of making the shift geometry “less short.”

The final height of the shifter will depend on where I set the the threaded portion at. I expect that the top of the shift knob will end up around 33-34cm. A couple cm of height, one way or another, won’t matter, but I’d sure love to dial in just the right amount of “shortness.”

Here’s the AKG tunnel mounted shifter. Note that it’s pivot point is also a bit above the tunnel. 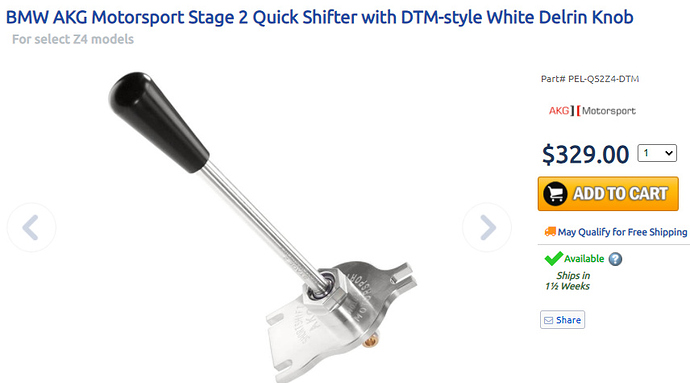 The intent of this next picture is to show shifting “shortness.” The lower shifter is OEM. Note that it has no length at all beyond the shifter pivot point. That makes for long shifter throws. 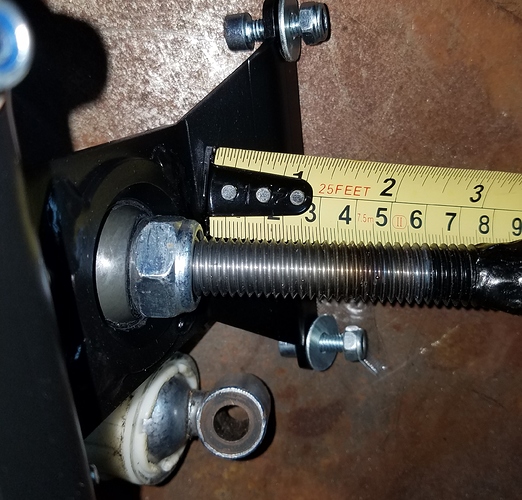 This last pic is an attempt to show the needle bearings that will grab the shift rod, or in my case, a DSSR. It’s a tight fit–you’d have to bonk your rod into it. Once in there would be no slop yet smooth action because of the bearings. Certainly my AKG shifter doesn’t have needle bearings. 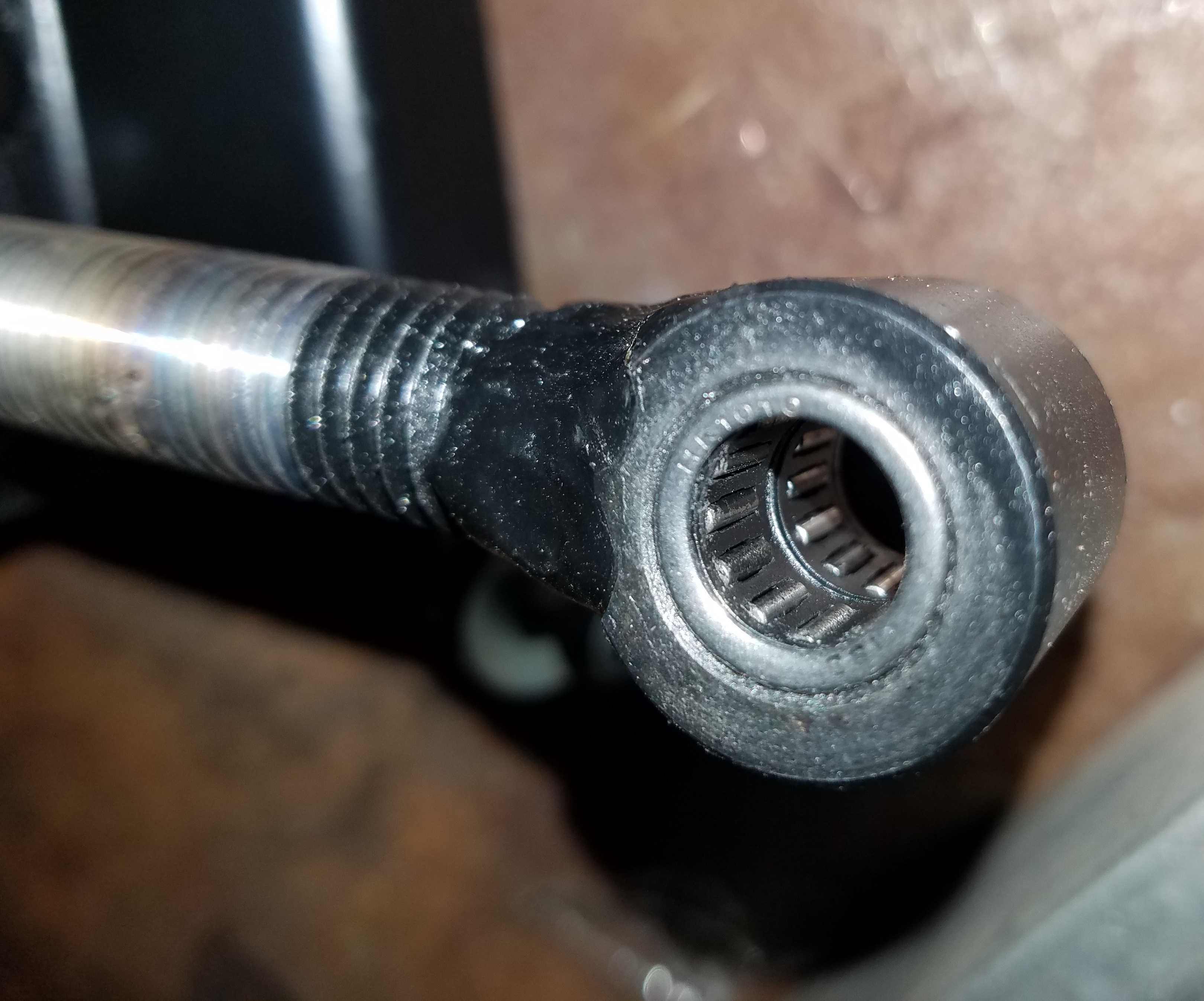 The shifter is installed. I also put in a UUC Dual Shear Shift Rod (DSSR).

Everything was a tight fit, and that took some extra work, especially getting the DSSR to mate up with the tranny. But when one wants a tight shift linkage, it’s hard to complain when the bits end up being a tight fit. Wasn’t a matter of forcing anything, I just had to get the DSSR properly alighed with the tranny’s shift button thing. I finally had to pull out an inspection mirror to figure out what the problem was, then have #1 son move the shift linkage in the right direction as I tapped on the fastening pin.

In order to set the “shortness” of the adjustable shifter, I carefully inspected the geometry of the too short AKG shifter, then reduced the length of the adjustable rod below the pivot point by about 0.25". I’d guess the throws will be about 15% longer than they were before.

The shifter came with 6mm x 20mm(?) bolts but I had better luck with 6mm x Longer bolts. 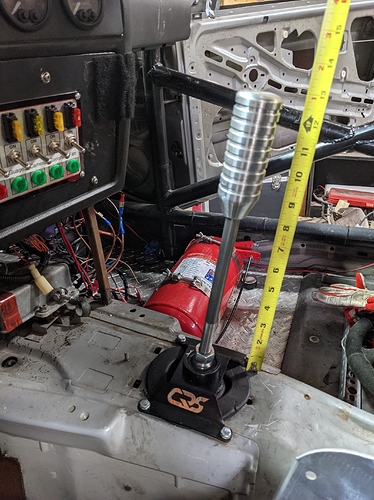