A little background. Car has been raced for last three years, a handful of times per year. When I got car, trans was wet with what appeared to be trans fluid, so I had someone install a hose on the trans overflow, terminating in a catch bottle in the engine compartment. Note that at this point only the trans was damp, not the underside of the car. After installing the overflow tube, I never saw a trace of fluid in the bottle. That was three years ago, and it seemed to have stopped the fluid leak, so I was pretty sure it was the overflow vent.

Fast forward to June 2019, raced RA, got car home, and noticed a substantial amount of oil covering the driver’s underside of car, so much so that there was trans fluid pooling in the driver’s rear footwell area. No idea how fluid got there, other than it seeped in from under the car. Another data point is that there was also a very small amount of fluid in the catch bottle, and the underside of the hose seems to be damp with oil. Not wet though, just damp.

After reading every post I could find on this, it certainly seemed that the hose had popped off the vent allowing the trans fluid to again escape, but this time much worse than when I got the car. Before checking the vent, I pulled the inspection plate off the trans to see if it may be engine oil, but it was dry under the plate and under the oil pan and bell housing, so I ruled out engine oil.

So, I figured it was the vent. I loosened the motor mounts, loosened the exhaust, and lowered the rear of the trans just enough to snake my hand up there, and it seems that the hose is still connected to the vent. However, I can feel what seems to be a hose clamp with no screw, so it is possible that the hose is not really very tight. But, the hose remains snugly on the vent, the band of the clamp seems tight against the outside of the hose, and a gentle tug did not pull it loose. So, I am baffled as to where the recent fluid is escaping from? Since I had never seen any fluid in the catch bottle and now there is a trace, could fluid have come out of the end of the hose, ran back down the hose, and then somehow covered the underside of the car? This seems to defy logic, but I really have no other idea, other than the hose is not really that tight on the vent, but then why would there be any fluid at all in the bottle? Any ideas?

Thanks for reading the long story.

Sounds like it may be the detent cover may leaking. Its The cover that look a like there are 3 balls underneath (because there are). There’s a trick to reinstalling so look it up but maybe start there.

Thanks man, I’ll take a look when I get home.

Here’s something to consider. The last time I was installing a transmission vent, I couldn’t seem to get the hose to stay on the vent pipe. What I finally did was drill out the vent pipe a teensy bit, slather some JBWeld on to a 1/8NPT hose barb, and thread it in. 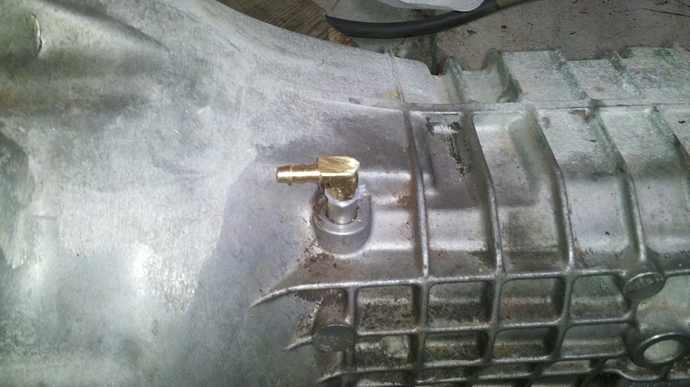 Thanks, I read that somewhere, but I checked and the hose is on there pretty good. After lowering rear of the trans, I was able to reach my hand up there and feel around. Hose seemed tight and all the way on the vent. Brake fluid is full, no evidence of leaks. Oil pan is dry. I checked the trans fluid level and it took maybe 6 ounces of fluid. The steering rack is quite wet (PS deleted, condor block installed), so conceivably it may be the rack leaking fluid, but the rack fluid looks reddish, and the oil under the car is brownish, and there was so much fluid under the car. I did check and tighten the detent cover, which was quite loose, but the oil appears under the car farther forward of that location. I’m baffled…

In my case it was the detent cover plate. I could not believe how much oil was coming out of this thing.
I had the car on jacks in the garage to figure it out:

I can see how it can leak that much, but in my case, the detent cover is well behind where the leak seems to have begun. I tightened it anyway. Nice video, and your trans is way cleaner than mine.